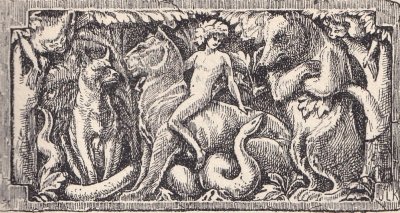 Rudyard Kipling spent seven years in India as a journalist, after leaving school at sixteen. He saw something of Indian jungles and heard a good deal about them. His father wrote a book called Beast and Man in India. Rudyard would also have heard the stories of children being brought up by wolves.

One night a toddler from a jungle village, tracked by Shere Khan, the lame tiger, takes refuge in a wolf”s cave. The Mother Wolf defies the tiger, and lets the little boy join her cubs. They call him Mowgli, and he is accepted into the Wolf Pack, spoken for by Baloo the brown bear and Bagheera the black panther. The cubs are his brothers.

Mowgli is looked after by Baloo and Bagheera, who teach him the Laws of the Jungle, for survival. He talks to the shiftess monkey people, who carry him away to a ruined city. He is rescued by Kaa, the great rock python, whom the monkets fear, and Kaa becomes yet another friend and protector.

Mowgli is stronger and can hunt for himself, but some of the wolves fear and hate him, because he is a Man. He leaves the wolf pack and finds his way to a jungle village, where he is welcomed by Messua, the mother who had lost him. He herds the buffaloes out in the jungle, and – with his brother wolves – drives them down a ravine to kill Shere Khan. He is stoned by the villagers, and returns to his wolves.

Letting in the Jungle

Mowgli hears that the villagers have turned on Messua and her husband. He finds them bound in their hut, waiting to be killed. He frees them, full of anger and sends them on their way to safety. Then, with the help of the elephants and the wolves and Bagheera, he lets in the jungle on the village, destroying the crops, and breaking down the walls. The villagers flee. In a few months there is no sign that it had ever existed

Kaa takes Mowgli to Cold Lairs, the ruined city in the jungle, where there is a great treasure, guarded by an old cobra. Mowgli is not interested in the gold, but brings away a beautiful ankus, a decorated elephant goad. It is heavy, and soon he throws it away. Later he and Bagheera are hunting, and find that a man has found and taken it. Following the trail they find he has been killed for it, as have five others after him. It is death !

An epic story of battle. A pack of dholes, fierce hunting dogs, invades the Seeonee Jungle. Mowgli and the wolves decide to fight, rather than run away. Mowgli tricks them into a gorge full of dangerous wild bees, and many perish. There follows a great battle with the wolf pack, in which the dholes are beaten, but Akela dies. Mowgli is left sorrowing.

It is Spring, a time of new growth, when the jungle is full of new life. Mowgli is now at his full strength, but he feels uneasy and restless. He makes a great run through the jungle, but the sadness comes back, worse than ever. He and all his family, Baloo, Bagheera, Kaa, the brother wolves, know that the time has come for him to go back to the world of men.

A small family of Inuit—Eskimo people—live in snow houses in the Arctic, with their dogs. One winter food runs short and they may all starve. Two of the dogs fight and run away. Then a boy and girl set off into the night to find the seals, for life. They find first the dogs, and then the seals, and all survive.

Kotick is a rare creature, a white seal, growing up on a beach in the Bering Sea. He sees regular drives of young seals being murdered by hunters for their skins. He vows to find a place where his people are free from men, and after epic journeys around the oceans finds a safe sanctuary.

There are cobras in a garden, Nag and Nagaina, laying their eggs in the melon bed. They plan to raise their poisonous brood, and drive away the people. Happily a small but valiant mongoose appears, to wages war against the snakes.

He attacks Nag in the bathroom until the man can shoot him. He destroys Nagaina’s eggs, and chases her down her burrow. He comes out, dusty but victorious. The garden is safe.

The Amir of Afghanistan is to visit the Viceroy of India. The animals, baggage camels, mules, a cavalry charger, a pair of gun bullocks, an elephant, all to be part of the parade, talk together about their work, their fears, and their duties. Next day the Afghans are mightily impressed by the discipline on display.

Every year the elephant catchers go out, and little Toomai is desperate to be one of them. On the last night of the season Kala Nag, his father’s elephant, breaks his tether and heads off into the night. Little Toomai begs to come too, and Kala Nag picks him up. Deep in the jungle they meet hundreds of other elephants, who dance together, thundering their feet up and down. Little Toomai is the only one who has ever seen the elephants dance.The Miracle of Purun Baghat

The Miracle of Purun Bhagat

Purun Dass. Prime Minister of a Native State, takes a staff and begging bow as a wandering holy man. He settles in a shrine high above a village, pondering long on the meaning of life. When a landslip threatens, he turns to action and saves the village with the last of his strength. They build a shrine in his memory, but no-one knows that he had once been Sir Purun Dass.

Three scavengers, a giant crocodile–a Mugger–an Adjutant Stork, and a jackal, are on the river back, a menace to many small creatures, and some big ones.

The Mugger remembers how in 1857, the year of the Sepoy Rebellion, the bodies floated down the river after the massacres, and he was well fed. But a young man, who had escaped his jaws as a baby, watches above from the bridge, aims his elephant gun, and shoots him dead.

Gisborne, a young forest officer, looks after an area of jungle, encouraging new plantations into life, dredging out choked streams. He encounters Mowgli, who is now a grown man, with his wolf brothers. Gisborne is amazed at his knowledge of the jungle, and asks him to be a Forest Ranger. Mowgli accepts, weds a local girl, and settles down to raise a family.