[Title] The Judgement of Dungara Jan Montefiore writes: Dungara is not a place, but the name of the pagan god worshipped by the Buria Kol— ‘The God Of Things As They Are’, as Kipling calls it. The ‘naked, good-tempered, timid, shameless, lazy Buria Kol’ (p. 246) are peaceful hunter-gatherers . They have a temple to their god and a priest, to whom they bring offerings of ‘fowls and fish and honeycomb’ from the mountain jungle around them, but no settlement or village because that implies agriculture, which they don’t practise (though Justus Krenk briefly introduces it, along with weaving and clothes). What they have is a territory whose location is given in terms of geographical sites (p. 246) – a gorge, a river, and the ‘blue hill of Panth’ whose names sound plausible but, as John McGivering says, all seem to be made up by RK himself, as is ‘Dungara’. The details of the mountain forest with bamboo bridges and tigers suggest a Himalayan setting, especially as there was a German missionary centre at Kotgarh, referred to in “Lispeth”, though that was Moravian, not the Tubingen Mission which Justus Krenk belongs to.

So the title really means something like “The Judgment of Baal”, or any other pagan god you can think of. A mildly blasphemous joke, whose potential offence is disguised by the invented name ‘Dungara’ which has been taken by some readers to be a place-name.[J.M.]

[Heading] This is a deliberate misquotation of a line in A Life Drama (1853) by Alexander Smith (1830-1867) which should read: ‘Like a pale martyr with his shirt of fire’. This no doubt refers to a martyr being burned at the stake or perhaps wearing a hair-shirt as an act of penance. Smith was one of the writers available to the young Kipling at United Services College when the Head gave him the freedom of his library. See “The Last Term,” (Stalky & Co.), Something of Myself (p.36) and Chapter 3 of Carrington.

[Page 245, line 3] the God of Things as They Are This is the last line of the Kipling’s verse “When Earth’s Last Picture is Painted.”

[Page 245, line 17] the Reverend Justus Krenk Jan Montefiore writes: I think his surname puns on ‘crank’, which the OED says had come to mean ‘obsessional eccentric’ by the late 19th C, first as American slang and then more widely. But Justus, a fairly common German Christian name, is also the name of Paul’s host in Corinth : ‘Justus, a man that worshipped God’
(Acts 18: 7), very appropriate for a missionary. [J.M.]

[Page 245, line 22] a call in this context, a belief that one is summoned by God to a certain course of action,

[Page 246, lines 2 – etc] ‘We will these heathen now… etc. T is dialogue is written as if it had been translated literally from he German and not rearranged into the English idiom. The American writer Mark Twain, whom Kipling greatly admired, uses this technique with humorous effect in his Innocents Abroad (1869) and A Tramp Abroad (1880) . [See “An Interview with Mark Twain” in Vol. 2 From Sea to Sea page 182].

[Page 246, line 8] lay-reader a layman licensed by a bishop to perform certain duties in the Church of England.

[Page 246, line 9] Kamala a red powder made from the fruit of Mallotus phillippinensis and used in medicine to expel tape-worms. (Black)

[Page 247, lines 10-17] As the day wears etc ORG suggests that these lines indicate that Kipling must have been a Christian believer. This has been much discussed by the commentators, with no firm conclusion. [See page 248, line 23 below].

[Page 247, lines 10-17] one creed as good as another this is the Riddle of the Sphinx attributed to several sources: All sensible men are of the same religion, but no sensible man ever tells. [quoted in “Dead Kings” (Letters of Travel)]. See also the verse “The Two-Sided Man.”

[Page 247, line 20] Bannockburn Medical Crusade Bannockburn is a town in Scotland where, in a notable battle, the English army was defeated by Robert the Bruce in 1314. This may refer to medical assistance for India provided by the town in Victorian times. [any information will be appreciated; Ed.]

[Page 247, line 22] Racine Gospel Agency in this context, a city in Wisconsin, U.S.A. which may well have had such a mission.

[Page 248, lines 12 & 13)] Gallio, the Assistant Collector of the countryside, ‘cared for none of these things’. Jan Montefiore notes: this comes from the Acts of the Apostles chapter 18. Gallio, Deputy of Achaea (i.e. a Roman official ) refused to have Paul prosecuted for a religious offence: ‘And Gallio cared for none of those things’ Acts 18: 17. (The Bible text has ‘those things’ not ‘these things’ Kipling, as usual, was slightly misquoting) [J.M.]

Kipling seems to have liked this text (or his own version of it). Together with the name Gallio, it recurs in “Gallio’s Song” accompanying the story “Little Foxes” in Actions and Reactions (1909), whose refrain is ‘I care for none of these things’.

[Page 249, line 31] Padri ‘Father’ in Portuguese, Spanish and Italian. A well established form of address to a priest n the Catholic Church today.

[Page 250, line 17] monarch of all I survey This is from Verses Supposed to be Written by Alexander Selkirk (the original of Robinson Crusoe) by William Cowper (1731-1800)

[Page 252, line 5] God of Things as they Should Be [not traced, information will be welcomed; Ed.]

… I will greatly multiply thy sorrow and thy conception; in sorrow thou shalt bring forth children; and thy desire shall be to thy husband, and he shall rule over thee.

Lotta must have shown the Buria Kol an improved method of delivering babies.

In the sweat of thy face shalt thou eat bread..

Justus Krenk endeavoured to make the Buria Kol, a lazy people, work at the
cultivation of crops.

[Page 253, line 15] hackle in this context, to comb flax or similar material ready for spinning and weaving.

[Page 254, line 8] the Red Elephant Tusk It must have been bored out to make a kind of trumpet.

[Page 255, line 21] the Shirt of Nessus In Greek mythology, Nessus, the Centaur, attempted to rape Deianira, the wife of Hercules, who shot him. The dying Centaur gave her his blood-soaked shirt saying it would reclaim Hercules if he were unfaithful to her; he was, she gave him the shirt and it killed him. 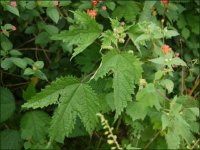 [As an experienced journalist, Kipling was usually very careful to get his facts right. However, this Editor cannot suppress a small suspicion that in this case the tribesmen would have probably suffered burns when processing the material and warned Justus accordingly, destroying the point of the tale. Written in haste for a newspaper, it probably never entered his mind that a hundred years later his story would be examined in such critical detail ; Ed.]