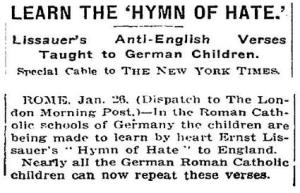 This “Humn of Hate” was composed shortly after war broke out in 1914, and in a few months was translated and published in the United States (then a neutral nation). The New York Times admired Lissauer’s technical skill, but described the poem as “simply abominable,” and “a brutal and wicked production.”* In Germany, not surprisingly, the poem was an immediate success. The Kaiser honored Lissauer, and the Crown Prince of Bavaria ordered that the poem be printed and distributed to his troops.

One of history’s little ironies – a period piece of First World War propaganda from a curious source which rebounded on its author. Ernst Lissauer is barely remembered. Most of his poems (and other literary works) are now forgotten (even, perhaps particularly, in Germany), but one strill strikes a distant chord: mention the name and there is an almost automatic reflex reaction – that ‘Hymn of Hate against England’:

This became his trademark, the ‘Hymn’ that made him famous (or notorious), and no regret, disclaimer or remorse could ‘cancel half a line, or all the tears wash out a word of it’. [History Today Volume 37 Issue 7 July 1987)]

Kipling and the poem

I recently came across this poem thanks to an MA thesis by Roger Smith, a post-graduate student in the German programme at Victoria University of Wellington, New Zealand … His thesis is entitled: ‘Give ’Em a Few Bars of the Hymn of Hate’: The German and English-Language Reception of Ernst Lissauer’s ‘Haßgesang gegen England’. During his thesis, Smith suggests, very plausibly, that Kipling’s poem ‘The Beginnings’, the poem, following ‘Mary Postgate’ in A Diversity of Creatures (1917), was one of many contemporary reactions to Lissauer’s poem and begins:

It was not part of their blood,
It came to them very late
With long arrears to make good,
When the English began to hate.8

Smith is clearly right. Kipling’s refrain (‘When the English began to hate’) seems too direct an echo for coincidence. I did briefly wonder whether Lissauer’s poem might itself be a reaction to Kipling’s own much-publicised poem ‘For All We Have and Are’, but ‘The Hymn of Hate’ first appeared in August 1914, a few weeks before Kipling’s poem in The Times on 2 September. Valuable as Smith’s recovery of this particular action and reaction is, it is clear from his surrounding commentary that his knowledge of Kipling’s poems written during the First World War is narrow. The Kipling he recycles is merely the belli- cose recruiting-officer version, unmodified and uncomplicated by the Kipling of ‘My Boy Jack’, ‘Gethsemane’, ‘The Nativity’ and ‘Epitaphs of the War’.