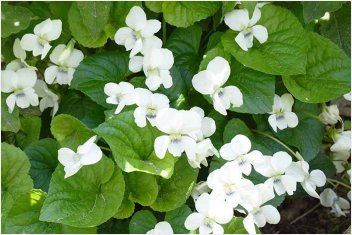 ‘’Ere’s the tail o’ the wood,’ said Ortheris. ‘’E’s got to come up the watercourse, ’cause it gives ’im cover. We’ll lay ’ere. ’Tain’t not arf so bloomin’ dusty neither.’

He buried his nose in a clump of scentless white violets. No one had come to tell the flowers that the season of their strength was long past, and they had bloomed merrily in the twilight of the pines.

This is from “On Greenhlow Hill”,  The Soldiers Three are out on a Himalayan hillside, looking out for a deserter who has absconded with his rifle and has been sending bullets into their tents  for days.

As they lie there Learoyd tells the story of his lost love, and the tragedy on Greenhow Hill in his native Yorkshire that led him to go for a soldier.

Later Ortheris get his man.