In his Newsletter Jan2022 Mike Kipling gives details of forthcoming Society meetings in April, July, and September, raises the question of whether there is suficient demand from members to support an Annual Luncheon, and lists the poems and extracts read at our very successful Readings in December. He also reports the sad loss of Meredith Dixon, who took part in that Reading session and died in a car accident a few days later. 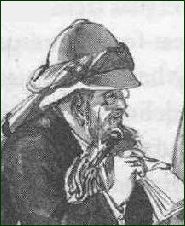 He also includes a note on a video on Kipling in which Jan Montefiore took part, a further instalment in the account by Tonie and Valmai Holt of coincidences in the lives of Rudyard Kipling and Bruce Bairnsfeather; a hostile review in India of ‘The Enlightenment of Pagett, M.P. (left)’,

an Indian comic book representation of a Jakata about the Buddha which may have inspired ‘The King’s Ankus’; an extract from a series of lock-down literary parodies;  a note on a facsimile of a Jungle Book MS offered by SP Books; and finally a matchbox from Boer War days showing Kipling’s ‘Absent Minded Beggar’.