In January 1892 Rudyard Kipling married Caroline Balestier, who came from Vermont in New England. After a world trip, the Kiplings settled there in Brattleboro.The following year they built themselves a great timber house on a rocky hillside, Naulakha. RK wrote there in his book-lined study, where he continued work on the Jungle Books.

James Pringle, of the Boston Globe, who met RK on one of his visits to the fishing port of Gloucester, Mass., found him friendly and unpretentious.

“…he affected no fine raiment or sought notice by distinctive attire. While here he wore a suit of brownish tweed which might have been picked out from a lot on a ready-made counter at the prevailing price for a suit of that quality in those days, $15… Inseparable was the pipe of French briar..”

In December 1892, at the time when his daughter Josephine was born, RK met someone who was to become ‘the best friend I made in new England’, Dr James Conland, respected physician and a member of the State Legislature, who had grown up on Cape Cod. He had served at sea in his youth with the Gloucester fishing fleet on the Grand Banks.

Dr Conland’s tales of those times fired Kipling’s imagination, and led him to embark on Captains Courageous, the story of Harvey Cheyne, a spoiled teenager, son of a railway magnate, who falls overboard from a liner in mid Atlantic. He is picked up by a dory (a small rowing boat) from a fishing schooner on the Grand Banks, and is taken on as a fisherman. The experience changes his life. The book is rich with details of the life at sea of Gloucester fishermen, their talk, the risks they run, and the pride they have in their craft. Ever since, it has been celebrated in Gloucester as an authentic account of a fine old tradition, now passed away. 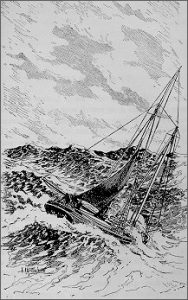 ‘…The fog had gone, but a sullen sea ran in great rollers behind it. The ‘We’re Here’ slid, as it were, into long sunk avenues and ditches which felt quite sheltered and homelike if they would only stay still; but they changed without rest or mercy, and flung up the schooner to crown one peak of a thousand gray hills, while the wind hooted through her rigging as she zigzagged down the slopes. Far away a sea would burst in a sheet of foam, and the others would follow suit as at a signal, till Harvey’s eyes swam with the vision of interlacing whites and grays…’ 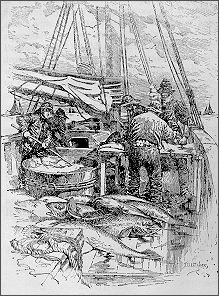 ‘Hi!’ shouted Manuel, stooping to the fish and bringing one up with a finger under its gill and a finger in its eye. He laid it on the edge of the pen: the knife-blade glimmered with a sound of tearing, and the fish, slit from throat to vent, with a nick on either side of the neck, dropped at Long Jack’s feet.

‘Hi!’ said Long Jack, with a scoop of his mittened hand. The cod’s liver dropped in the basket. Another wrench and scoop sent the head and offal flying, and the empty fish slid across to Uncle Salters, who snorted fiercely. There was another sound of tearing, the backbone flew over the bulwarks, and the fish, headless, gutted, and open, splashed in the tub, sending the salt water into Harvey’s astonished mouth. After the first yell, the men were silent. The cod moved along as though they were alive… 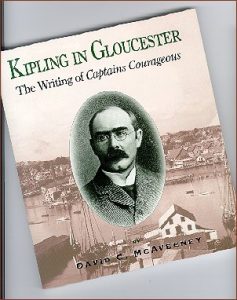 Kipling only visited Gloucester for ten days at the most, spread over four short visits. As he recalled in his autobiography “Something of Myself”, he was taken to sea by Dr Conland in a …pollock fisher, which is ten times fouler than any cod-schooner, and I was immortally sick, though they tried to revive me with a fragment of unfresh pollock.

One of the marvels of Captains Courageous is how RK managed to get so close to the talk and feelings of the Bankers, and the technicalities of life on a fishing schooner, on the strength of a few short visits to Gloucester, and some long chats about old times with Dr Conland. This has been the theme of a recent book about “Kipling in Gloucester” by David C McAveeney.

How was Captain’s Courageous written? Who were the models for Disko Troop, or Harvey Cheyne, or Manuel, or Pennsylvania Pratt, or the black gaelic cook, or Harvey’s millionaire father? How did RK discover how you bait up a line, or take a sight of the sun, or ‘dress down’ the catch? How did the wisest skippers find the fish? What songs did the men sing when they hove to in rough weather?

What chaff passed between the boats when the fleet gathered around the ‘Virgin’ rock? How fast could you get a private railcar from San Diego to Gloucester? All of this and much else is the theme of David McAveeney’s book, which has been greeted by Thomas Pinney, of Pomona College, – the leading Kipling scholar in North America, and editor of the Kipling letters – as ‘an absolutely first-rate piece of local history, the outcome of much original research and special knowledge.’