by Michael Smith with an afterword from  Alastair Wilson 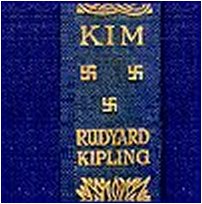 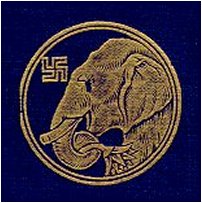 A question frequently asked of the Society concerns the presumption that Kipling’s use of the swastika meant that he allied himself to the Nazi cause. Fortunately it is easy to show that this is a misapprehension, and a number of articles in the early issues of The Kipling Journal explain the provenance of its use. This suspicion is nothing new. When the topic resurfaced in more recent numbers there was interesting testimony from, for example, the late Tom Driver, a well-respected Kipling bookseller in Arundel Sussex, England (Kipling Journal September/December 1984). Mr Driver had found that the author was regarded by potential customers as objectionable because so many of the detested symbols could be seen on the books displayed around the shop entrance.

He kept a tally and found that on average, the comment was made about once each week. But even those who ought to know better perpetuate misconceptions.As George Webb, the Editor of the Kipling Journal pointed out in a note accompanying Mr Driver’s letter, the late Professor V. de S. Pinto, an eminent authority on English literature in his Crisis in English Poetry [Hutchinson, 1951, later revised] revealed a total ignorance of what the pre-Nazi Swastika stood for, and linked its use with some of Kipling’s work. 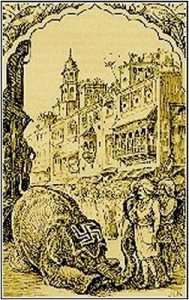 Kipling’s own introduction to the swastika as an Hindu good luck symbol certainly came through his father’s encyclopaedic knowledge of Indian art.

Indeed an illustration produced by John Lockwood Kipling entitled “Choosing the next King” for a story in Flora Annie Steel’s Tales of the Punjab (Macmillan 1894) shows a sacred elephant kneeling before the Prince who was to accede. The top of the elephant’s head was covered with a cloth embroidered with a large swastika.

The use of such a symbol, however, can be traced back in antiquity. In Sanskrit the word means “fortunate” or “well-being” but it was used in the Neolithic Europe as a potter’s stamp, was incised as a mason’s mark in Minoan Crete, was found in Homeric Troy, and in early Indian civilizations. Kipling knew, also, that the Hindu trader opens his annual account-book with a swastika in order to ensure an auspicious beginning. Buddhist migration carried it as far as China and Japan, and other influences to West Africa and America. Early Christian art employed it as a “fylfot”, filling the foot of ecclesiastical stained-glass.

The extraordinary feature of the use of the symbol by Kipling’s publishers was that there was no uniformity in whether the right turn or left turn was used. Edgar Brown’s article (Kipling Journal July 1929) stated that neither Kipling nor Edward Bok, with whom the author corresponded about the subject, was certain which was propitious and which the harbinger of misfortune. 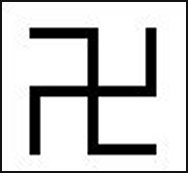 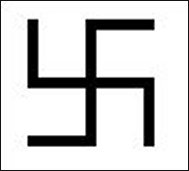 Subsequently Mrs Miriam Block (KJ January 1930) stated that the point turned to the right was the “good” sign and the point to the left the “evil”. But even this seems not to be definitive for in John Shearman’s letter (KJ March 1980), he said that, having attended a course of lectures at the University of Tehran, he proposed the opposite. He thus ascribed Hitler’s hakenkreuz (hooked cross) as – appropriately – being “evil”.That both variants are used in Kipling’s works is undisputed. Frequently on introductory pages the ‘left’ is used, although there are even artistic extensions of this, whilst on the ‘Ganesha roundel’ there is always a small ‘right’ swastika between the elephant’s forehead and the circle enclosing it. 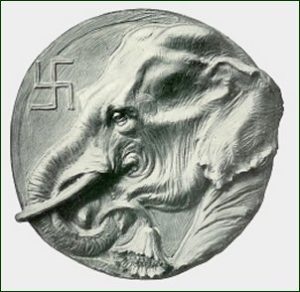 Ganesha, the most immediately recognisable of Kipling’s “logos” shows the elephant headed God who was the son of of Siva and Parvatti.
The elephant is the symbol of wisdom and foresight and shown with the trunk down and curled means good forum. The trumpeting elephant, on the other hand, represents anger and thus ill-luck. Ganesha holds in his trunk a lotus flower which is revered throughout the ancient world as ensuring both good health and good fortune. Kipling had used the symbol from the last decades of the Nineteenth Century and so to suggest that it associated him with Hitler is clearly absurd.

In a note to Edward Bok, written after the death of Lockwood Kipling, Rudyard Kipling said: “I am sending with this for your acceptance, as some little memory of my father to whom you were so kind, the original of one of the plaques that he used to make for me. I thought it being the Swastika would be appropriate for your Swastika. May it bring you even more good fortune.” Edward Bok used the swastika in his own bookplate.

Once the Nazis had usurped the swastika Kipling ordered that it should no longer adorn his books. A craft bookbinder at Dartington Hall recently reported that she had bought an original of the block used by Mactmillan showing clearly the space from which the swastika had been excised.

The Kipling Journal itself used a frame of black swastikas on its red cover until issue number 36, published in December 1935.The following Journal in March 1936 was, of course, Kipling’s obituary number and the swastika frame was replaced by a thick black line ofmourning.

Thereafter (adds Alastair Wilson)  the Society never again used the symbol, replacing it soon with the Lowenthal plaque which met with the general approval of Society members. David Gilmour refers to Kipling’s removal of the swastika symbol at p. 304 of The Long Recessional. Gilmour writes: “In 1933 Hitler became Chancellor and quickly established his dictatorship. ‘The Hitlerites are out for blood’, noted Kipling: ‘the Hun [was] stripped naked for war’ while the British, still running down their defences, were displaying less forethought than ‘incubated chickens’.” [This quote is footnoted ‘K to Doubleday, 17 March 1933, & K to Hughes, 29 Dec 1933.] Gilmour continues, “Kipling was so disgusted by the Nazis and the sight of their flag that he removed the swastika, a Hindu symbol of good luck, from his bookbindings. It had been his trademark for nearly forty years but it was now ‘defiled beyond redemption’.” [This latter quote is footnoted “K to Bok, 1 Nov. 1935, and to White, 28 Dec 1935.]